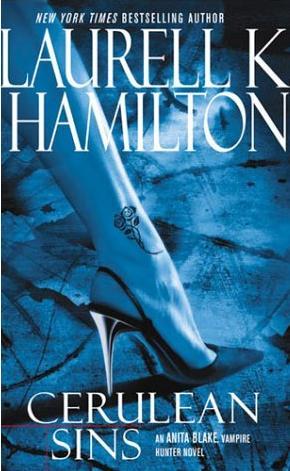 With her “New York Times” bestselling Anita Blake, Vampire Hunter novels, Laurell K. Hamilton wraps readers up in stories of suspense and sensuality. Cerulean Sins is no exception. Now, Anita learns what it’s like to be at the new end of a centuries-old bloodline-and just how far she’ll let herself get pushed around by one of the oldest vampires alive…or should we say dead?

The European vampire council has sent an emissary, and once more, these people don’t follow their own freaking rules. I’m always a big fan of having insight into vampire culture, because I think it’s interesting how they manage to retain ancient traditions and use them like they aren’t living in a completely different time. Of course the European Council is very traditional, and very old school. Such a well-defined etiquette system means that it’s very hard to accidentally offend somebody, provided that you know the rules.

Unfortunately, Anita wasn’t raised in that society, or with that type of thinking, and she doesn’t know the rules. Of course it works as an advantage, because she thinks of doing things that none of the vampires would’ve ever thought to do. On the other hand, she often endangers them because she does things that they really are not supposed to do.

We got to see Anita to learn when to use violence, versus when to use more diplomatic measures. Of course, she had help from Damian. I loved seeing Damian be the vampire servant to Anita’s necromancer. I think it goes to show that even though she’s made strides to be a little less angry and a little bit more practical, the vampires around her still have strong memories of her temper and tread lightly, using Damian to chill her out.

This book was a little harder for me to review because it is more politically based than action or emotion based. While, because there were shape-shifters and vampires involved, there was some action, most of the book revolved around vampire politics, society, and culture. When a book is mostly comprised of telling you facts about a particular society or culture, you just kind of have to accept it as fact. You can agree with it, disagree with it, even like or dislike certain aspects of it, but at the end of the day it is what it is.

I have to comment on how ironic it is that an assassin (Leo Harlan) came to Anita for help raising an ancestor. Of course this ended with them playing a gun-draw version of Chicken. I love how Laurell K. Hamilton has all these little moments that are really funny quirks of amusement throughout her books, such that even if the book is really heavy or there’s a lot of emotional/personal growth happening, readers get a little bit of relief. The entire scene where they’re at Gordon Bennington’s gravesite was lighthearted, mixed with a little foreshadowing. Having Asher flying in and Anita try to cover him with her own body, even though he’s so much taller than her, screaming, “don’t shoot,” was the pièce de résistance.