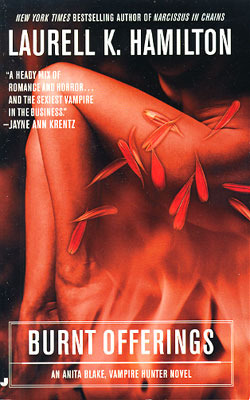 “You can’t trust anyone who sleeps with the monsters.”

That’s what I’ve always said. That’s what I’ve always believed. But now I’m the one sharing a bed with the Master Vampire of the City. Me, Anita Blake. The woman the vampires call the Executioner. From part of the solution, I’ve become part of the problem. So it hits close to home when an arsonist begins to target vampire-owned businesses all over town — an arsonist who seems to want to destroy more than just property. It’s the monsters who are in danger now. And it’s up the Executioner to save them from the inferno…

We got to see Larry again, and he hadn’t really changed much from last book. He was still a little new to the whole vampire executioner thing, and he still had that odd sort of naivety about him. We got to see that he was slowly starting to learn from his mistakes (never leave a vampire alone even if you think he is held down), and I also liked how he was trying to imitate Anita’s badassedness (combo word: 3 points). His refusing to take painkillers, and not stopping to drive until he just couldn’t put up with it anymore, was nice touch of hero worship.

I really liked the Zane character. He’s that type of character, who tries to be strong for others, and he cares enough to try, but when it really comes down to it, it’s just not his style. I really felt his relief when he told Anita that he was so relieved that he didn’t have to assume that position or that persona anymore. I think he is one of the more neutral characters in the series, who are semi cannon fodder but go out of their way to make sure they aren’t.

I also adored Nathaniel. I knew he was going to be a big part of the series since he was introduced in this book. Laurell K. set it up so that Nathaniel would constantly be coming back as a little annoyance for Anita, by forcing her to try to make him a little bit more independent, and making her deal with the fact that she kind of likes (and needs) a more domestic pet/partner in her life, who doesn’t put any demands on her. Most of all I think I am looking forward to seeing his journey in the story, and how he grows and Anita’s part in that.

I very much guiltily enjoyed how Anita flexed her lupa muscle in the book. Given my review of the last book, where I hated how Richard purposefully set her up for him to reject her, I think he deserved that little bit of payback. I understood Sylvie’s point of view, with regards to protecting the wereleopards, but I think that it’s that kind of thinking that results in painting different people with the same brush stroke. I have to admit I kind of didn’t like the revenge of the Raina Sith Lord (aka munin). I definitely feel that Raina’s munin spirit will come back to bite Anita in the ass, big time (the bitch can’t help herself, even from the grave).

I loved how cute Jean-Claude was during his date with Anita. The mental image that Laurell K. created with that line about him rolling like a cat lounging languorously when they ate at home, was so freaking yummy. It kind of gave us a glimpse at how, when Jean-Claude doesn’t have all the pressure of being the master of the city, he’s… cute.

The plotlines in this book were mostly focused on describing the vampire council, making us understand how the number of vampires on the council is maintained, how they mete out their laws, and showing us how scary they are. I have to say I love to hate everybody on the council. Laurell K. did a good job of writing some really crazy ass villains. Padma, the Master of Beasts (or Beast Master, as Anita calls him), was a creepy Hindu dude, and his son, Fernando, was just one really twisted fuck. They were weak people, who found themselves in positions of power, and so they tortured others just to prove how big and bad they were. This was definitely proven at the end, where Padma basically sends Fernando off to be killed by Thronnus Roke Clan, just to save his own skin. I really liked the Traveler. I loved how gay and totally embracing it he was, for an old-school vampire. I also loved the many comments Anita made about the Traveler and Balthasar’s sex life, and how the ability to switch bodies must enhance their sex life, because that was totally true, but I would’ve never thought of it. I really didn’t understand Yvette’s character. I guess that’s mostly because I don’t understand the night hag or rotting vampire mentality, because I am fundamentally not a creep who feeds off of other people’s fear.

I really enjoyed how tortured Asher was, and I know that sounds bad, but it gives him a good place to grow from. The ending was set it up such that we already know that Anita and Jean-Claude don’t care about his scars, and we can anticipate seeing him stay in St. Louis and grow more comfortable in his own skin. His character has a potential future plot line about forgiveness and accepting oneself as you are now, and not staying in the past and what could have been, or should have been.

Burnt Offerings was a great in-depth introduction into vampire politics, and started to show how Jean-Claude, Anita and Richard’s triumvirate had caught the attention of all master vampires, even the ones in Europe.